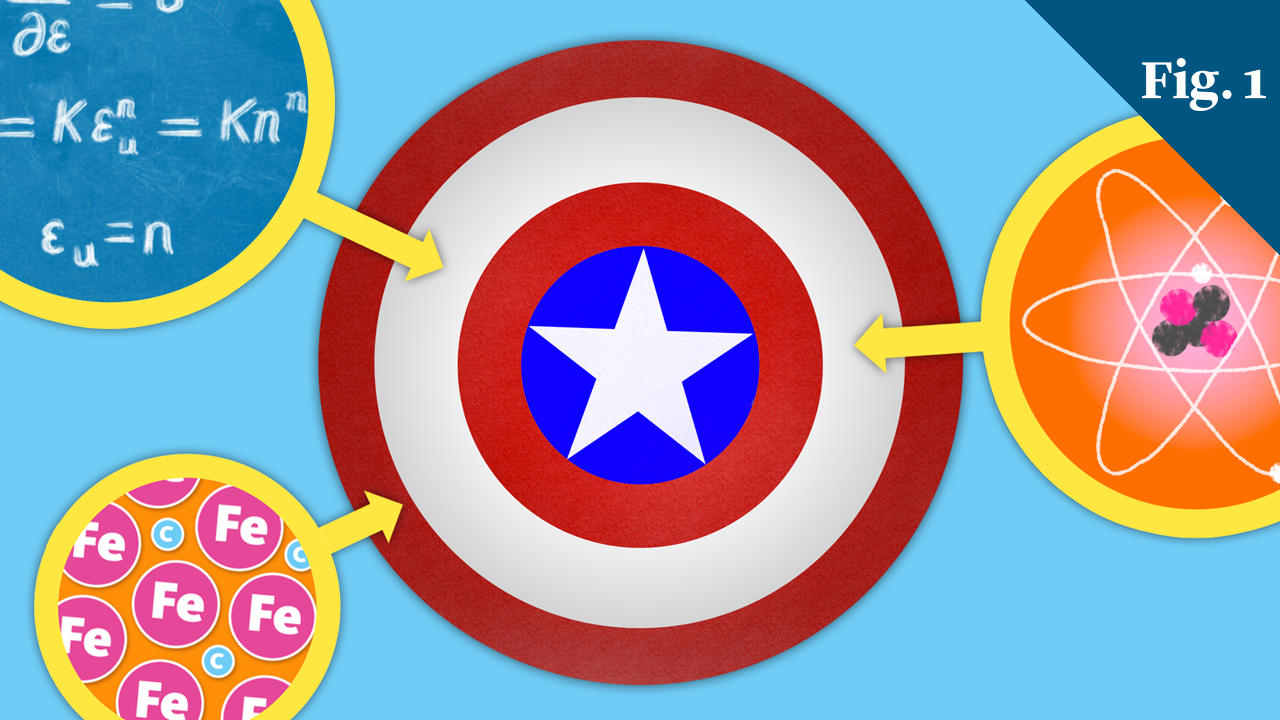 Concepts that push the boundaries of what’s possible inspire the work in Mathaudhu’s UC Riverside lab – sometimes even paving the way for real-world inventions.

“People don't really identify their superheroes as scientists, but first and foremost they are, and often before they gain their powers,” said Mathaudhu. “They're scientific superheroes.”

In nearly every comic book, science is a key element in a superhero’s life.

“If you look at Bruce Banner, who turned into the Hulk, he's a scientist. Peter Parker, he's a chemist who designed his own webs. Iron Man, he's an engineer who builds and designs his own suits and his own armor and his own devices,” said Mathaudhu.

Comic book science is serious business, as Mathaudhu proved when he took on a real-life scientific superhero.

When famed astrophysicist Neil deGrasse Tyson posted to Twitter, “If Thor's hammer is made of neutron-star matter, implied by legend, then it weighs as much as a herd of 300 billion elephants,” Mathaudhu couldn’t back down.

As a decisive blow, he pointed to a Marvel trading card he had gotten in high school that stated that Thor’s hammer weighed precisely 42.3 pounds.

“So I wrote back a rebuttal and I estimated the weight to be very similar to aluminum,” said Mathaudhu. “I calculated the size and I back calculated out the density and said, perhaps it could be solid hydrogen, which we haven't been able to really make, but it could occur in the core of a dying planet because of the pressures."

Mathaudhu beamed, “The pinnacle of my academic career is getting Neil deGrasse Tyson to admit that he was wrong.”

Arguing about the weight of Thor’s hammer may seem like trivial silliness, but it has roots in real materials science questions: If we could make solid hydrogen, what would its properties be? Can we make a material that approaches the properties of Thor’s hammer?

Some of Mathaudhu’s own research has been inspired by Captain America’s shield: is it possible to make a material that is both incredibly strong and super lightweight?

“According to the comics, during the fighting of the Panzer Division tanks in World War II, F.D.R. tasked an Army scientist named Myron MacLain for making a new metal, a new steel to make their tanks out of,” explained Mathaudhu.

During MacLain’s experiments, a mystery element fell into the steel and vibranium (a fictional element that absorbs kinetic energy), forming the super-hard material that would later become Captain America’s shield. MacLain was never able to duplicate the material.

Mathaudhu picked up where MacLain left off, using advances within the last decade that have allowed scientists to look at the microstructure of materials and their physical properties.

“We can realize exactly why a samurai sword behaves the way that it does, even though the artisans didn't know what they were making,” said Mathaudhu.

His recent research has focused on techniques for making lightweight metals stronger.

“With lightweight metals like magnesium and aluminum, they don't have the strength or the formability that you have in steel, that is the ability to be shaped into new shapes,” said Mathaudhu.

But with the new ability to work with metals at a microscopic level, everything changes.

“We take the grain structures – the small crystals that make up a metal – and refine them down to the nanoscale, below what the eye can see,” said Mathaudhu. “When you take the grain size below one hundred nanometers, the physics change. The materials get very, very, very strong, and sometimes also have high formability.”

Advances in this area have already made a real impact, particularly in transportation. Lighter vehicles mean better fuel efficiency, making cars cheaper to run and better for the environment.

The Ford F-150, the top-selling pickup truck in the U.S., recently shifted from a steel body to an aluminum body, increasing the fuel economy of the vehicle by reducing the vehicle’s weight by 700 pounds.

Making the body weigh less is a big start, but there’s another less obvious source of weight: wiring. Automobiles can have upwards of 100 pounds of electrical cabling.

“Most of it is thick copper cable, and copper cable is heavy – and now copper is very expensive,” said Mathaudhu. “If we could get a fraction of that conductivity in aluminum, it would not only be cheaper to implement, it would be lighter-weight even though it will never have the conductivity that copper will inherently have.”

Mathaudhu’s research has shown how you can use nanostructured features in aluminum to maintain its conductivity, while simultaneously boosting the strength of the aluminum. Aluminum is both cheaper and lighter, so by moving toward aluminum cabling, car manufacturers can solve two problems at once.

The webs we weave

From electrical cabling, Mathaudhu jumps to another type of cable: Spiderman’s webs.

“In the original Spiderman comics, he did not have webs shooting out of any specific glands, or any powers that let him make web inside his body,” explained Mathaudhu. “As a chemist, he was forced to experiment and make his own super-strong, web-like material.”

Real spiderweb is extremely strong – by weight, it’s much stronger than steel. Researchers have been attempting to mimic spiderwebs synthetically to make high-strength cables and fibers. This is closer to reality than it might sound: A startup founded by UC alumni called Bolt Threads has patented a method for producing material equivalent to spider silk for use in clothes.

Mathaudhu also points to the Boeing Dreamliner, where the aluminum airplane body was replaced by carbon-fiber composites.

“In the future, if we could get stronger fibers for these kinds of materials, we could potentially make them even lighter and stronger.”

New materials can make old applications stronger and more efficient, and they can also take us in completely new directions.

Don’t be surprised if some of those new materials seem to have leaped from the pages of an old comic book.

Will cars of the future run on poop?

Is brown the new green? UCLA researchers are using waste matter (yes, including poop) to make a new generation of advanced biofuels.

The war on climate change: Are we at a new tipping point?

For four decades UC San Diego atmospheric scientist Veerabhadran "Ram" Ramanathan has warned that carbon dioxide and other emissions from human activity are heating up the planet. One of the…