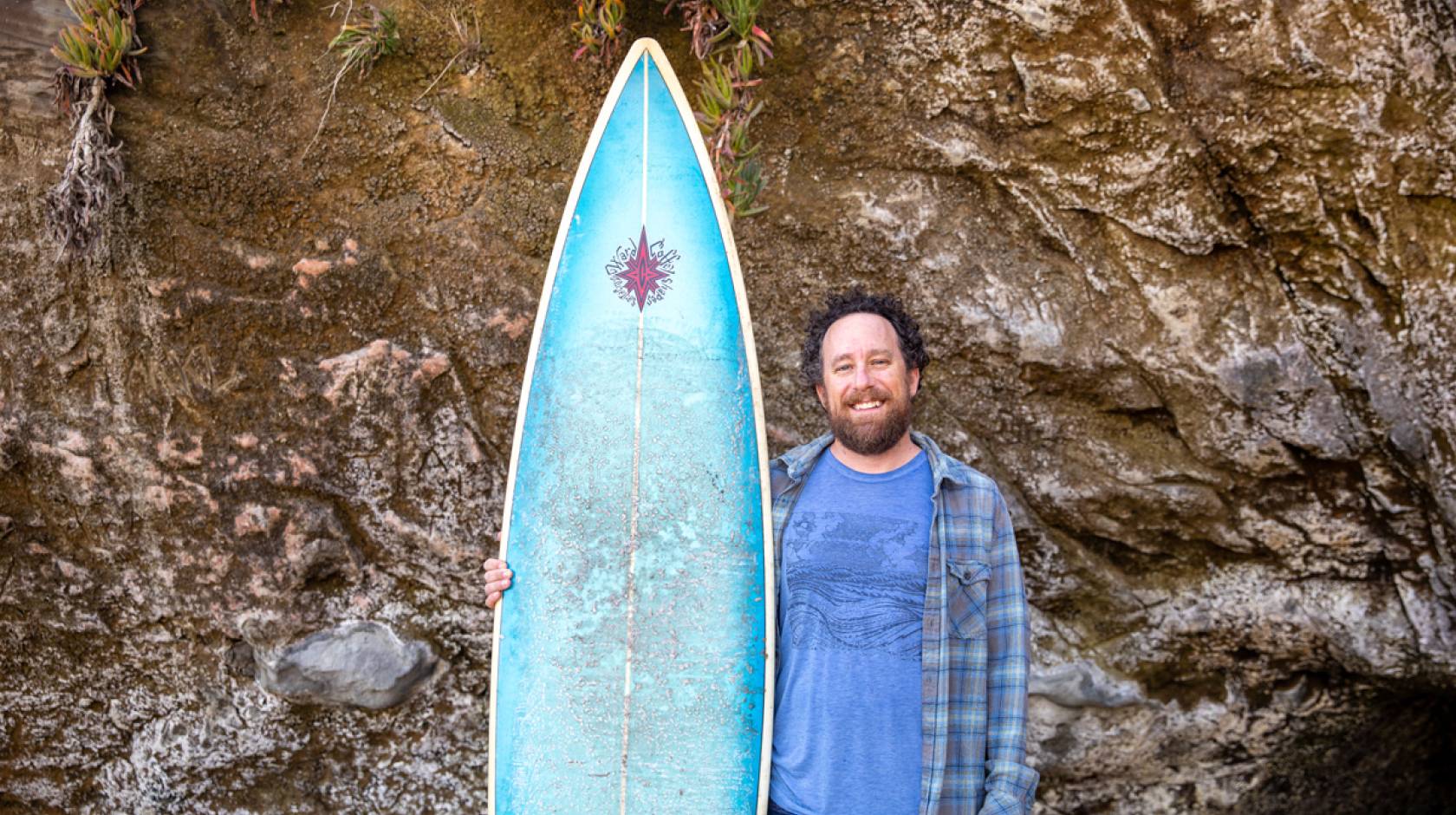 Credit: Carolyn Lagattuta
David Schulkin (Oakes '00, psychology) is a licensed psychotherapist in private practice and a longtime surf teacher for UC Santa Cruz's Adventure Rec program in the Department of Athletics and Recreation.

When David Schulkin paddles into a wave off the Santa Cruz coastline, he sees more than just a curling tunnel of blue. He sees life.

He sees it in the way a surfer needs to have a plan going into the water but must be willing to shift or throw it away when conditions change. He sees it in the fact that putting a lot of effort into paddling only pays off if your timing is also right; that you have to stay sharp and be aware of every opportunity to catch a wave when it comes along.

A licensed psychotherapist in private practice by training and a longtime surf teacher for UC Santa Cruz's Adventure Rec program in the Department of Athletics and Recreation by calling, the 44-year-old Schulkin is someone, former student Raúl Betancourt said, who “is there on the path with you. He’s all about joy and about passing on the joy of surfing and of life in general.”

A Los Angeles native, Schulkin came to UC Santa Cruz drawn by the town vibe and the good, consistent waves nearby. He majored in psychology at Oakes College and graduated in 2000. Wanderlust took over, however, and Schulkin began traveling the globe.

For five years, he taught at surf camps and with local surf school Club Ed, and, when the season was over, he would head out on his own. He caught waves in places like Japan, Indonesia, New Zealand, Samoa, Cook Islands, Tonga, Costa Rica, Mexico, and Hawaii. He even had a session in Israel.

“I was hungry for experiences. I was basically exploring my internal and external world,” Schulkin said and then laughed. “I have to give credit to my parents, who believed I would come back and eventually be a productive member of society.”

One day, he said, as he hitched a ride back from a surf spot in Chile, he thought suddenly: “What the hell am I doing?”

He realized he wanted to invest in community instead of the individual-centered life he was pursuing.

He came back to Santa Cruz, heard about the Institute of Transpersonal Psychology in Palo Alto — now Sofia University — and thought psychotherapy was what he wanted to do with his life. While answering an ad for a room to rent back in Santa Cruz, he met his future wife Lindsay Knisely, who now teaches writing at UC Santa Cruz.

“The stars just aligned,” he said.

All this time, he taught surfing at UC Santa Cruz, first, as a TA and then as a lead instructor. He has taught the sport to UC Santa Cruz students for more than two decades, loading a van with students, wetsuits, and long, floaty foam boards and heading out to tame surf spots where he teaches the skills and mentality of the sport. For a while, the campus held a 10-day surf expedition to Baja, which Schulkin led.

Betancourt (Merrill ’99, history and chemistry), who teaches middle-school science in Honolulu, Hawaii, remembered the passion and support that Schulkin brought to his surf class and how the class allowed him to get out of his head for a little while amid the rigors of college life.

He was struggling during his first lesson, he said, repeatedly falling and being tumbled by the waves when Schulkin came up to him. “He said that surfing was hard but that I needed to keep trying,” Betancourt remembered.

That advice stuck with him and, during the next lesson, he caught his first wave. Schulkin, he said, began hooting and gave him a big high five. “He said, ‘Oh, you got it now. You got the bug now.’”

Betancourt, 46, has been surfing ever since.

“I love to watch them stand up [on a wave] and be stoked,” Schulkin said of his students. “To see them on this knee-high wave and yelling, ‘Yeah!’ It keeps the stoke fresh. It’s really so lovely to share that with them.” 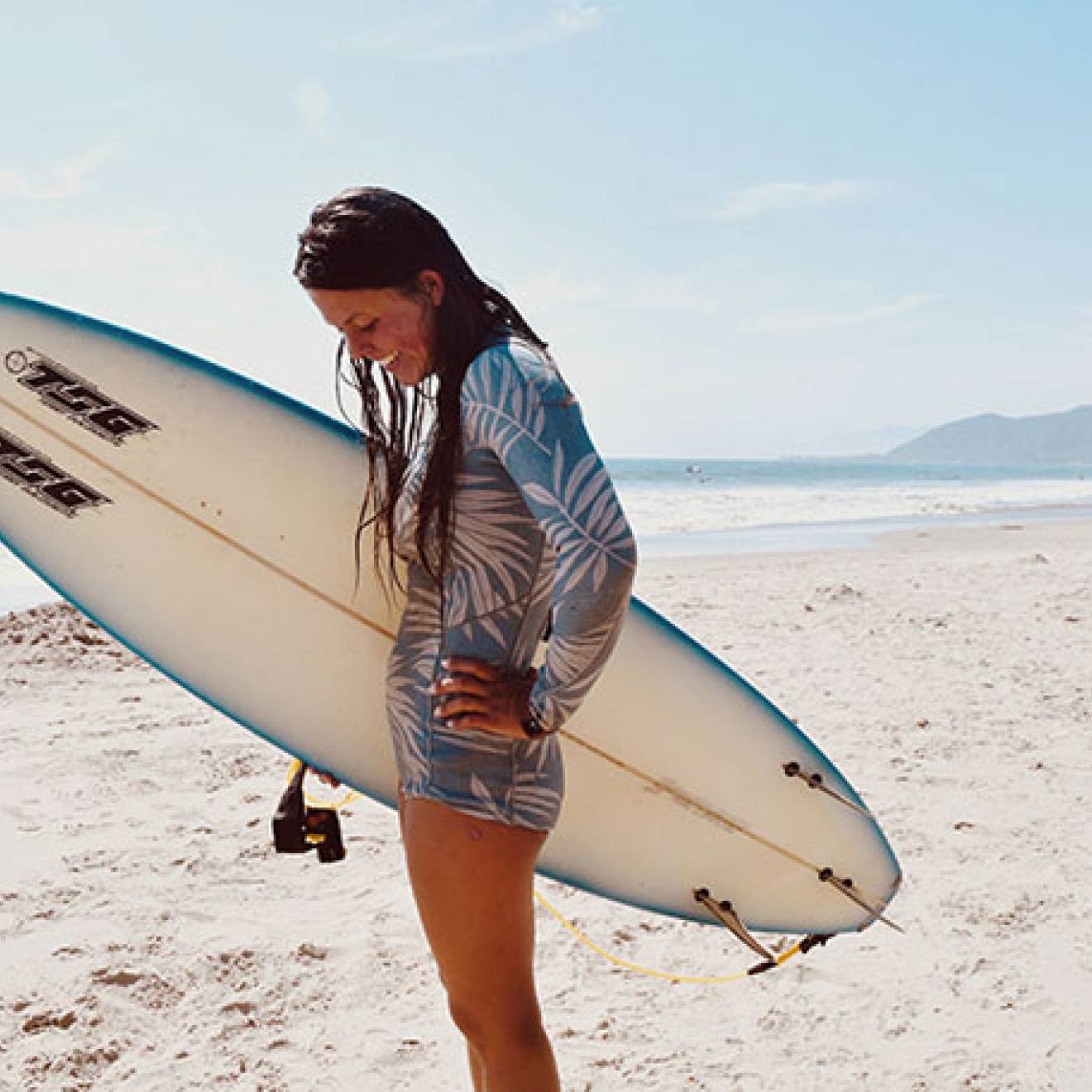 Juggling chemistry with surfing, Katia Gibson says: “I’ve had an epiphany, and I want my life to be like this.” 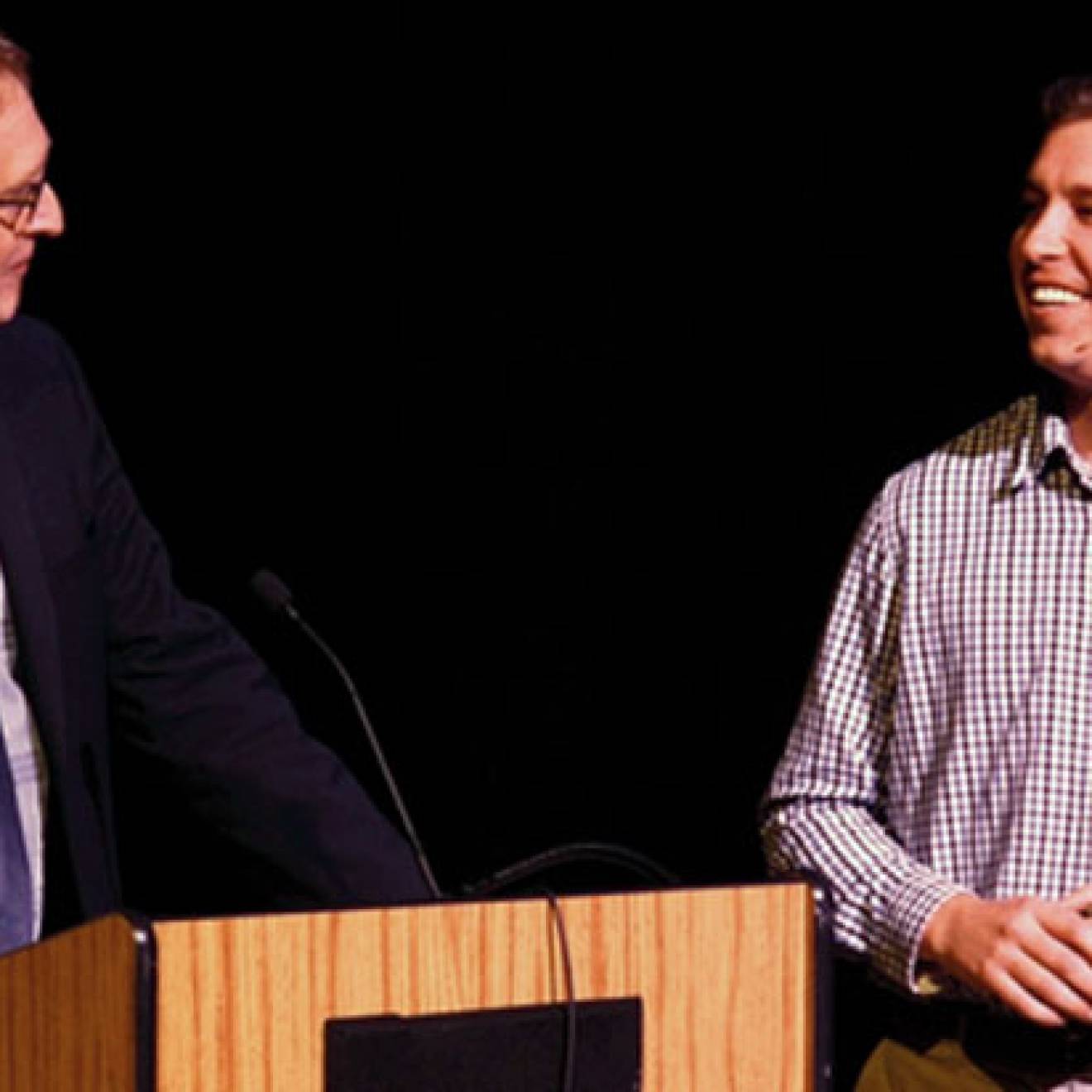 Grad students present research from across the spectrum in 240 seconds or less to earn a spot in the systemwide final.