UC Office of the President September 4, 2014 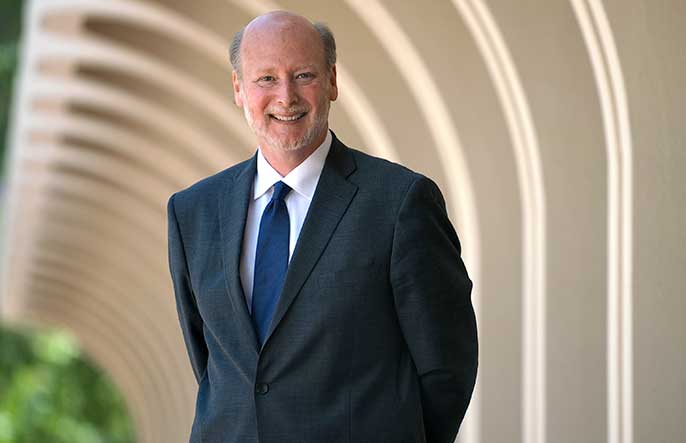 Gillman, 55, the first in his family to go to college, is a time-tested leader who has received multiple awards for both his scholarship and teaching. He assumed the role of interim chancellor July 1 after Michael V. Drake, M.D., became president of the Ohio State University.

The UC Board of Regents will vote on the selection and terms of appointment in a special session to be scheduled for Sept. 18 during the regents’ regular bi-monthly meeting in San Francisco.

“Howard Gillman will bring a great array of attributes to the entire UC Irvine community as chancellor,” Napolitano said. “He appreciates the entrepreneurial spirit and bold ambitions embodied by the campus, and he has the imagination, intelligence and energy to lead the faculty, staff and students to the next level of excellence.”

Napolitano noted that the leadership of UC Irvine is important to the larger community as well as the campus itself. With more than 29,000 undergraduate and graduate students, 1,100 faculty and 9,400 staff, UC Irvine is a major intellectual and cultural center that generates an annual economic impact of $4.4 billion in Orange County.  Consistently ranked among the nation's best universities, UCI also provides medical care as Orange County's only academic medical center.

Appointed provost and executive vice chancellor in June 2013, Gillman, a professor of political science, history and law, has served since then as the chief academic and operating officer, working closely with UCI’s five vice chancellors, 12 deans, the university librarian, Academic Senate leadership and the chief executive officer of the Medical Center.

In addition to leading strategic planning and the implementation of campus initiatives as provost, Gillman worked with deans to recruit and retain faculty. During the past year, 28 percent of new faculty members were members of under-represented racial and ethnic groups.

“I deeply appreciate President Napolitano’s confidence in me, and I am excited about the opportunity to lead a university with such an impressive faculty, staff and student body,” Gillman said. “Though it’s a relatively young campus at just over 50 years old, UC Irvine is incredibly accomplished, with great aspirations. I look forward to forging a shared vision with all who teach, research, learn and work on the campus, and with the larger community outside the campus.”

Before his appointment as provost, Gillman served as dean of the University of Southern California’s Dornsife College of Letters, Arts and Sciences from 2007 to 2012. He oversaw 33 academic departments, dozens of research centers and institutes, 7,000 undergraduates, 1,200 Ph.D. students and nearly 800 faculty members across the humanities, social sciences, and physical, biological and natural sciences. He was a professor of political science, history and law at USC, and was awarded the university’s top award for excellence in teaching.

“I want to congratulate President Napolitano on her excellent choice for chancellor of UCI,” said USC President C.L. Max Nikias. “I am so proud of Howard. And I have no doubt that under his leadership, UCI will become one of the most influential universities in the country. He is a man of extraordinary vision and profound integrity – a true leader!”

A nationally recognized expert on constitutional studies and judicial politics, Gillman has authored or co-authored seven books and dozens of articles.

“I have seen Howard Gillman work tirelessly to understand the campus and what is needed to lead it,” said Mary Gilly, chair of the systemwide UC Academic Senate and a professor of marketing at UC Irvine’s Paul Merage School of Business. “He has demonstrated he is ready for this honor through his savvy appointments of experienced UCI faculty to leadership positions, his enthusiastic support of all academic disciplines on campus, his unwavering advocacy for shared governance, and his efforts to represent campus interests in systemwide venues.”

Born in Southern California, Gillman grew up in the San Fernando Valley. He earned bachelor’s, master’s and doctoral degrees at UCLA. His wife, Ellen Ruskin-Gillman, Ph.D., earned her master’s degree and doctorate in psychology at UCLA after graduation from UC San Diego with a bachelor’s degree. They have two children.

“Howard Gillman has already made a big impact as provost, and I am confident that he will do an outstanding job leading UCI into the next 50 years," said Emile Haddad, president and CEO of FivePoint Communities and chairman of the board of trustees for the UC Irvine Foundation. “I would like to thank President Napolitano for an excellent choice.”

The search advisory committee was involved in recruiting, screening and conducting interviews with candidates for the position. The committee conducted in-depth interviews with seven finalists. The search was assisted by the executive search firm Isaacson, Miller.

“Howard Gillman is an excellent choice to be the sixth chancellor of UC Irvine, all the more so because he already knows and loves the campus, and already has earned the respect of faculty, students and staff,” Varner said.

“Part of what makes Dr. Howard Gillman exceptional is his ability to listen,” said Justin Chung, immediate past president of the Associated Graduate Students of UCI. “Many leaders have great ideas, but few have the humility to question their own premises or the courage to have candid, difficult conversations with those they lead and serve. Our frequent, lively conversations over the past year leave me certain that Howard — together with UCI’s students — will be successful in making his ambitious vision a reality.”

(NOTE TO NEWS MEDIA: Neither President Napolitano nor Gillman will comment further until the regents have acted on the proposed appointment.)