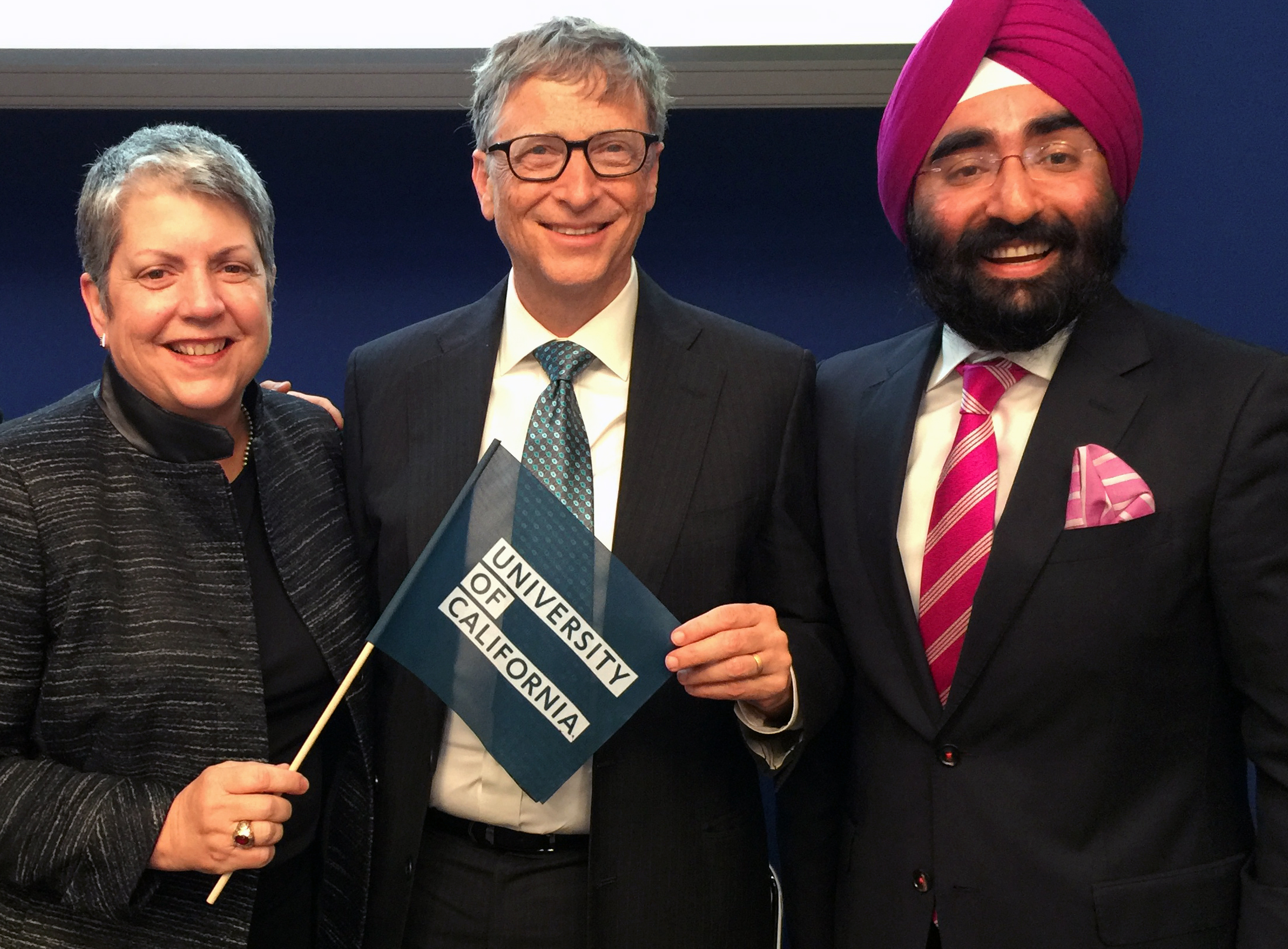 The University of California announced today (Nov. 29) that it has joined the Breakthrough Energy Coalition, an influential group of investors led by Bill Gates that is committed to investing in technology that can help solve the urgent energy and climate challenges facing the planet.

UC and its Office of the Chief Investment Officer, which manages the university’s endowment and pension funds, is the sole institutional investor among the 28 coalition members from 10 countries. The coalition is a counterpart to Mission Innovation, an initiative of 19 countries committed to dramatically increasing research and development funding for early-stage clean energy innovation over the next five years.

Both initiatives were announced today at the COP21 in Paris, the United Nations Climate Change Conference.

“The University of California, with its 10 campuses and three national energy labs, is home to some of the best climate scientists in the world and as a public research institution we take the imperative to solve global climate change very seriously,” said UC President Janet Napolitano. “With access to the private capital represented by investors in the Breakthrough Energy Coalition we can more effectively integrate our public research pipeline to deliver new technology and insights that will revolutionize the way the world thinks about and uses energy.”

“We can’t ask for a better partner than the University of California Office of the President and the Office of the Chief Investment Officer to help accomplish the Breakthrough Energy Coalition’s ambitious goal,” Gates said. “The UC system – with its world leading campuses and labs – produces the kinds of groundbreaking technologies that will help define a global energy future that is cheaper, more reliable and does not contribute to climate change.”

Said Jagdeep Singh Bachher, UC’s chief investment officer: “Investing in our new energy future alongside visionaries like Bill Gates and the other influential investors and philanthropists represents a historic opportunity for the University of California, the state of California and the world.”

In addition to committing to the coalition’s statement of investment principles, UC and its Office of the Chief Investment Officer will:

In November 2013, Napolitano announced UC’s Carbon Neutrality Initiative, which commits the university to becoming carbon neutral by 2025, which would make UC the first major university in the United States to reach this achievement. The ambitious target builds on UC’s pioneering work on climate research – as evidenced by its report on 10 scalable solutions announced last month – and furthers its leadership on sustainable business practices. UC is improving its energy efficiency, developing new sources of renewable energy and enacting a range of related strategies to cut carbon emissions.

UC’s Office of the Chief Investment Officer has committed $1 billion of its investment capital for early-stage and scale-up investments in clean energy innovation over the next five years, as well as an additional $250 million to fund innovative, early-stage ideas emerging from the UC ecosystem. It also has created an aligned intermediary, which will help large-scale, long-term investors channel significant amounts of institutional capital into resource innovation investments – including energy, waste and water – across the planet.

The University of California, home to 61 Nobel laureates, 86 winners of the MacArthur Foundation’s “genius” grants and 67 recipients of the Medal of Science, is widely considered to be the world’s premier public research university system.