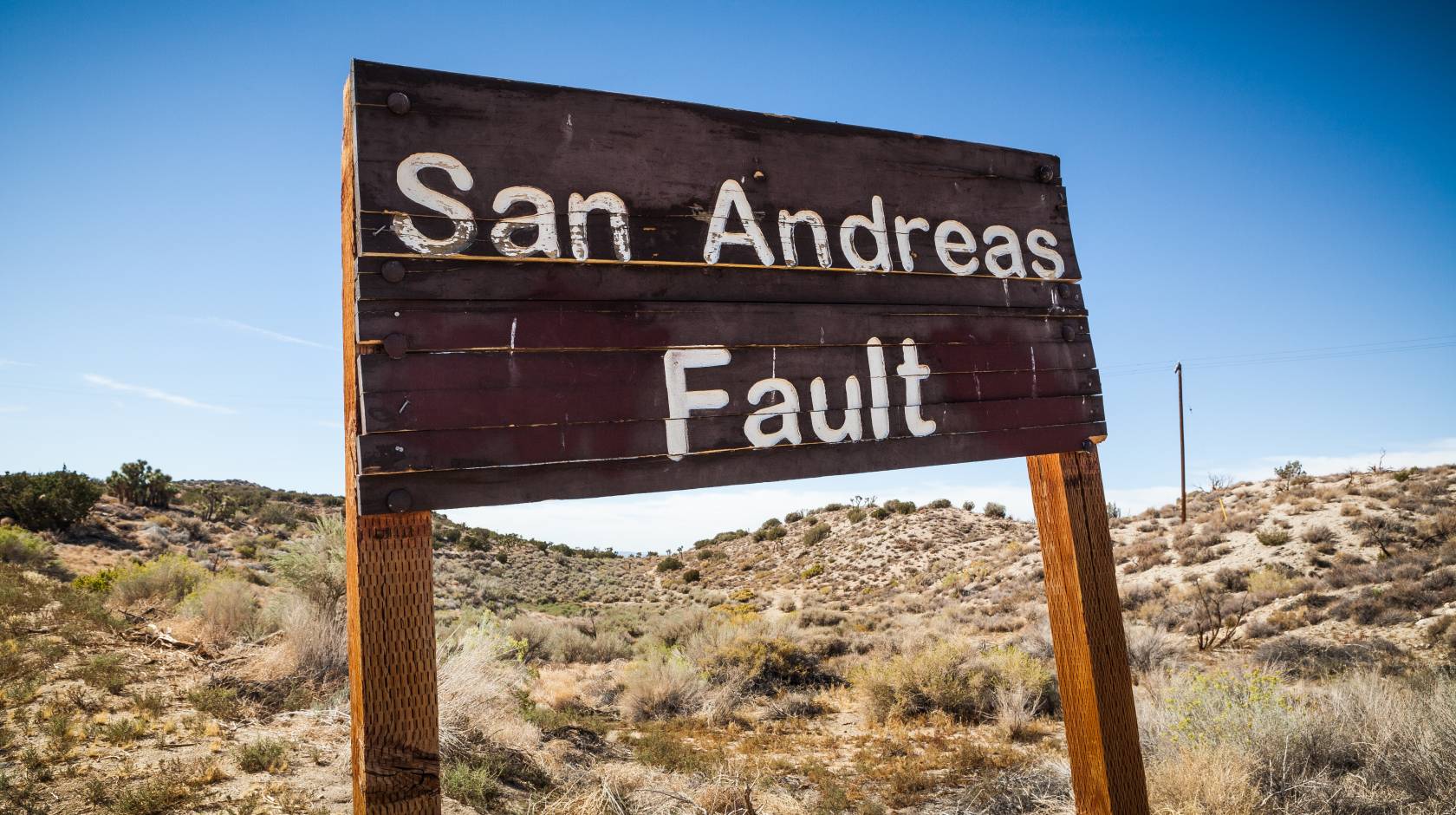 Most people have heard about the San Andreas Fault. It’s the 800-mile-long monster that cleaves California from south to north, as two tectonic plates slowly grind against each other, threatening to produce big earthquakes.

Lesser known is the fact that the San Andreas comprises three major sections that can move independently. In all three, the plates are trying to move past each other in opposing directions, like two hands rubbing against each other. But in the southern and the northern sections, the plates are locked much of the time—stuck together in an immobile, poisonous embrace. This causes stresses to build over years, decades or centuries. Then a breaking point comes; the two sides lurch past each other violently, and there is an earthquake. On the other hand, in the central section, which separates the other two, the plates slip past each other at a pleasant, steady 26 millimeters or so each year. This prevents stresses from building, and thus there are no big quakes. This is called aseismic creep.

At least that is the story most scientists are sticking with so far. Now, a study of rocks drilled from nearly 2 miles under the surface suggests that the central section has hosted many major earthquakes, including some that could have been fairly recent. The study, published February 25 in Geology, uses new chemical-analysis methods to gauge the heating of rocks during prehistoric quakes.

“This means we can get larger earthquakes on the central section than we thought,” said lead author Genevieve Coffey, who did the research as a graduate student at Columbia University’s Lamont-Doherty Earth Observatory. “We should be aware that there is this potential, that it is not always just continuous creep.”

Coauthors Pratigya Polissar and Heather Savage, now at UC Santa Cruz, developed a new technique that enabled the team to assess the history of earthquake slip on the fault.

“One of the goals of this work is to address the problem that the largest, most dangerous earthquakes are often rare and therefore either sparse or absent from the historical records used to estimate earthquake hazard for engineering and social planning,” said Savage, an associate professor of Earth and planetary sciences at UCSC. “Paleoseismic records using techniques such as carbon dating can push us back tens of thousands of years, but are only preserved in certain settings. Our solution is to use geochemical proxies to identify rocks that have experienced significant earthquake heating in the past, and to estimate the degree of heating.”

The threats of the San Andreas are legion. The northern section hosted the catastrophic 1906 San Francisco magnitude 7.9 earthquake, which killed 3,000 people and leveled much of the city. Also, the 1989 M6.9 Loma Prieta quake, which killed more than 60 and collapsed a major elevated freeway. The southern section caused the 1994 M6.7 Northridge earthquake near Los Angeles, also killing about 60 people. Many scientists believe it is building energy for a 1906-scale event.

The central section, by contrast, appears harmless. Only one small area, near its southern terminus, is known to produce any real quakes. There, magnitude 6 events—not that dangerous by most standards—occur about every 20 years. Because of their regularity, scientists hoping to study clues that might signal a coming quake have set up a major observatory atop the fault near the city of Parkfield. It features a 3.2-kilometer-deep borehole from which rock cores have been retrieved, and monitoring instruments above and below ground. It was rock from near the bottom of the borehole that Coffey and her colleagues analyzed.

When earthquake faults slip, friction along the moving parts can cause temperatures to spike hundreds of degrees above those of surrounding rocks. This cooks the rocks, altering the makeup of organic compounds in any sedimentary formations along the fault path.

Polissar and Savage figured out how to take advantage of these so-called biomarkers, using the altered compositions to map prehistoric earthquakes. By calculating the degree of heating in the rock, they say they can spot past events and estimate how far the fault moved, and from this, extrapolate roughly the sizes of resulting earthquakes.

In the new study, the researchers found many such altered compositions in a band of highly disturbed sedimentary rock lying between 3192 and 3196 meters below the surface. In all, they say the blackish, crumbly stuff shows signs of more than 100 quakes. In most, the fault appears to have jumped more than 1.5 meters (5 feet). This would translate to at least a magnitude 6.9 quake, the size of the destructive Loma Prieta and Northridge events. But many could well have been larger, say the researchers, because their method of estimating earthquake magnitude is still evolving. Earthquakes along the central section may have been similar in size to other large earthquakes on the San Andreas, such as the one that destroyed San Francisco.

The current official California earthquake hazard model, used to set building codes and insurance rates, does include the remote possibility of a big central-section rupture. But inclusion of this possibility, arrived at through mathematical calculations, was controversial, given the lack of evidence for any such prior event. The new study appears to be the first to indicate that such quakes have in fact occurred here. The authors say they could have originated in the central section, or perhaps more likely, started to the north or south, and migrated through the central.

So, when did these quakes happen? Trenches dug by paleoseismologists across the central section have revealed no disturbed soil layers that would indicate quakes rupturing the surface in the last 2,000 years—about the limit for detection using that method in this region. But 2,000 years is an eye blink in geologic terms. And, the excavations could be missing any number of quakes that might not necessarily rupture the surface at specific sites.

The researchers used a second new technique to address this question. The biomarkers run along very narrow bands, from microscopic to just a couple of centimeters wide. Just a few inches or feet away, the rock heats only enough to drive out some or all of the gas argon naturally present there. Conveniently for the authors, other scientists have long used the ratio of radioactive potassium to argon, into which potassium slowly decays, to measure the ages of rocks. The more argon compared to potassium, the older the rock. Thus, if some or all of the argon is driven out by quake-induced heat, the radioactive “clock” gets reset, and the rock appears younger than identical nearby rock that was not heated.

This is exactly what the team found. The sediments they studied were formed tens of millions of years ago in an ancient Pacific basin that was subducted under California. Yet the ages of rocks surrounding the thin quake slip zones came out looking as young as 3.2 million years by the potassium-argon clock. This sets out a time frame, but only a vague one, because the scientists still do not know how to judge the amount of argon that was driven out, and thus how thoroughly the clock may have been reset. This means that 3.2 million years is just an upper age limit for the most recent quakes, said Coffey; in fact, some could have taken place as little as a few hundred or a few thousand years ago, she said. The group is now working on a new project to refine the age interpretations.

“Ultimately, our work points to the potential for higher magnitude earthquakes in central California and highlights the importance of including the central [San Andreas Fault] and other creeping faults in seismic hazard analysis,” the authors write.

William Ellsworth, a geophysicist at Stanford University who has led research at the drill site, pointed out that while the possibility of a big quake is included in the state’s official hazard assessment, “Most earthquake scientists think that they happen rarely, as tectonic strain is not accumulating at significant rates, if at all, along it at the present time,” he said.

Morgan Page, a seismologist with the U.S. Geological Survey who coauthored the hazard assessment, said the study breaks new ground. “The creeping section is a difficult place to do paleoseismology, because evidence for earthquakes can be easily erased by the creep,” she said. “If this holds up, this is the first evidence of a big seismic rupture in this part of the fault.” She said that if a big earthquake can tear through the creeping section, it means that it is possible—though chances would be remote—that one could start at the very southern tip of the San Andreas, travel through the central section and continue all the way on up to the end of the northern section—the so-called “Big One” that people like to speculate about. “I’m excited about this new evidence, and hope we can use it to better constrain this part of our model,” she said.

How much should this worry Californians? Lamont-Doherty geologist and study coauthor Stephen Cox plays this down. “People should not be alarmed,” he said. “Building codes in California are now quite good. Seismic events are inevitable. Work like this helps us figure out what is the biggest possible event, and helps everyone prepare.”

The study’s other coauthors are Sidney Hemming and Gisela Winckler of Lamont-Doherty, and Kelly Bradbury of Utah State University. Genevieve Coffey is now at New Zealand’s GNS Science.

With a nod to UC Berkeley, Google crowdsources earthquake…

Billions of cell phones will supply real-time earthquake data around the globe.

What Hollywood gets wrong (and right!) about protecting the…